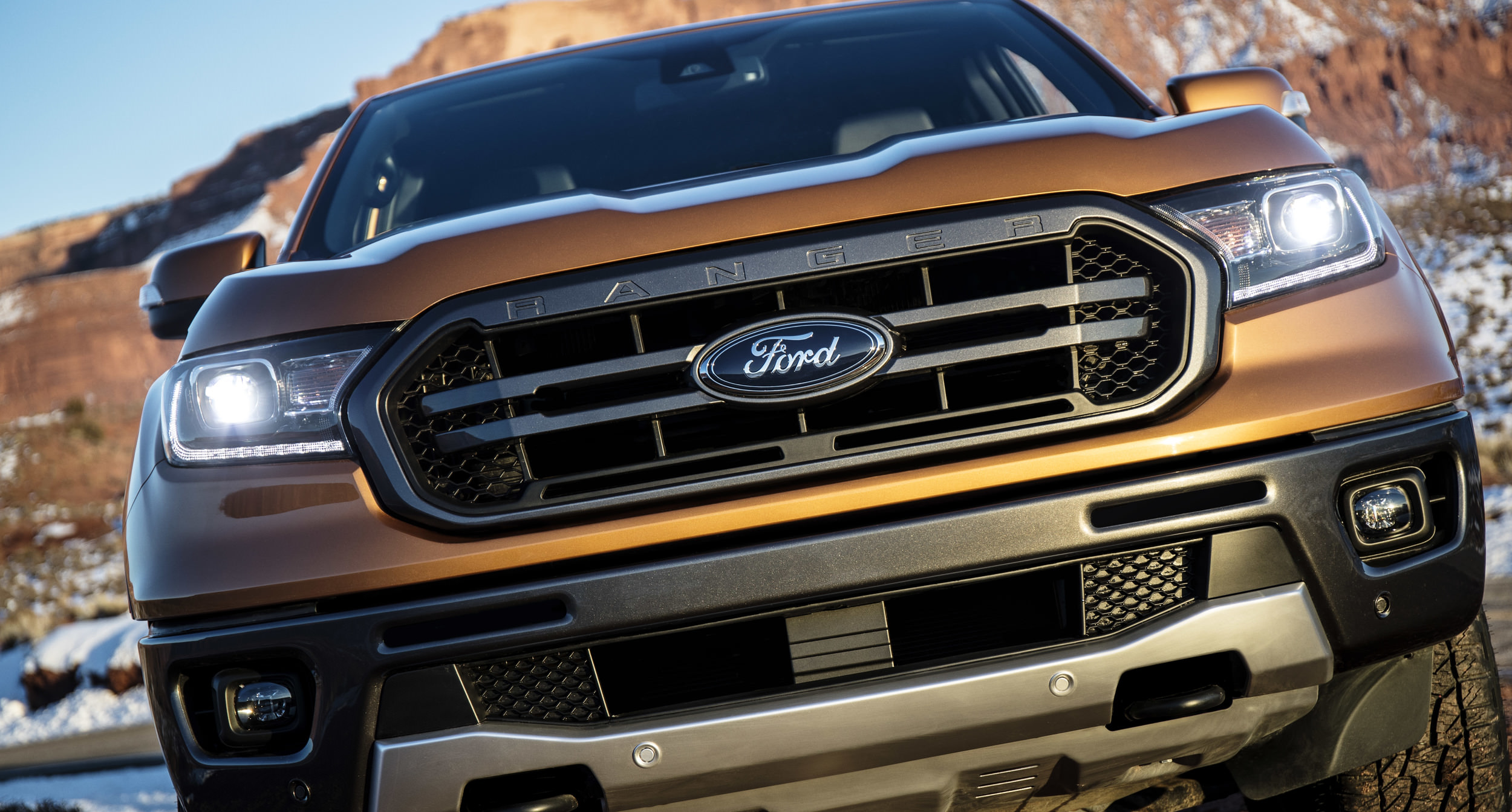 The eagerly awaited 2019 Ford Ranger arrives early next year offering an optional terrain management system geared for off-road use, plus what Ford says is the largest accessory offering of any truck, thanks in part to a new partnership with rooftop cargo manufacturer Yakima. Ranger pricing is also now officially official, starting at $25,395 including destination for the base XL trim.

During a meeting this week with Ford dealers from the U.S. and Canada, Ford showed the off-road capabilities of the Ranger to a group of invited reporters at a simulated course at the Las Vegas Motor Speedway. Though there will be no Ranger Raptor for the time being, Ford showed models equipped with the FX4 off-road package, which adds technology like terrain and trail control, plus steel bash and skid plates, and compared them against a 2019 Toyota Tacoma equipped with its similar crawl control technology on a steel incline obstacle with an approach made of logs.

Trail control essentially functions as a low-speed cruise control for off-road beginners or for use in especially tricky, rugged driving situations. It takes over the tasks of acceleration and braking and sends power and braking to individual wheels. It works with any of the Ranger's four drive modes — normal; grass, gravel and snow; mud and ruts; and sand. It also lets the driver override it by stepping on the gas or brake pedal at any time, and it works in reverse, too, at up to 5 mph.
Ford says the technology is driven by electric motors, where Toyota's crawl control is a vacuum-based system, a difference that showed up most starkly as we traversed the logs on an incline obstacle. The Ranger in trail control mode navigated the rough footing smoothly, while the Tacoma stuttered and jerked as it navigated over the bumps. The Ranger also offered better clearance underneath and on the rear hitch than the Tacoma on the steep incline. Other off-road features displayed on a simulation course included traction control, which uses an electronic limited-slip differential to ensure that other wheels can gain traction when one slips.

The Ranger will come with more than 150 custom accessories from partners including Warn and Yakima, the latter via a new partnership, with all equipment tested and licensed by Ford and covered by warranty through the suppliers. It represents Ford's biggest accessory offering for off-road and camping gear to date and compares to roughly 110 accessories offered for the F-150.

Ford unveiled the Ranger in January at the Detroit Auto Show. It's powered by a 2.3-liter EcoBoost four-cylinder also available in the 2019 Mustang and is mated to a 10-speed automatic. It's good for 270 horsepower and 310 pound-feet of torque and offers a maximum 7,500 pounds of towing capacity and up to 1,860 pounds of payload.

In keeping with Ford's plan to equip all new models with safety and connected technology, the Ranger comes standard with automatic emergency braking with pedestrian detection. Ford's Co-Pilot360 suite of driver-assist technologies is optional in the base XL trim but standard in XLT and Lariat. Other available technology options include FordPass Connect with a 4G LTE Wi-Fi hotspot, Apple CarPlay, Android Auto, Alexa and Waze for iPhone integration, and the Sync AppLink.
The midsize truck will be built at the Michigan Assembly Plant near Detroit starting later this year.
You must log in or register to reply here.
Share: Facebook Twitter Google+ Reddit Pinterest Tumblr WhatsApp Email Link