The 2019 Ford Ranger XL SuperCab Is Cheap and Quick 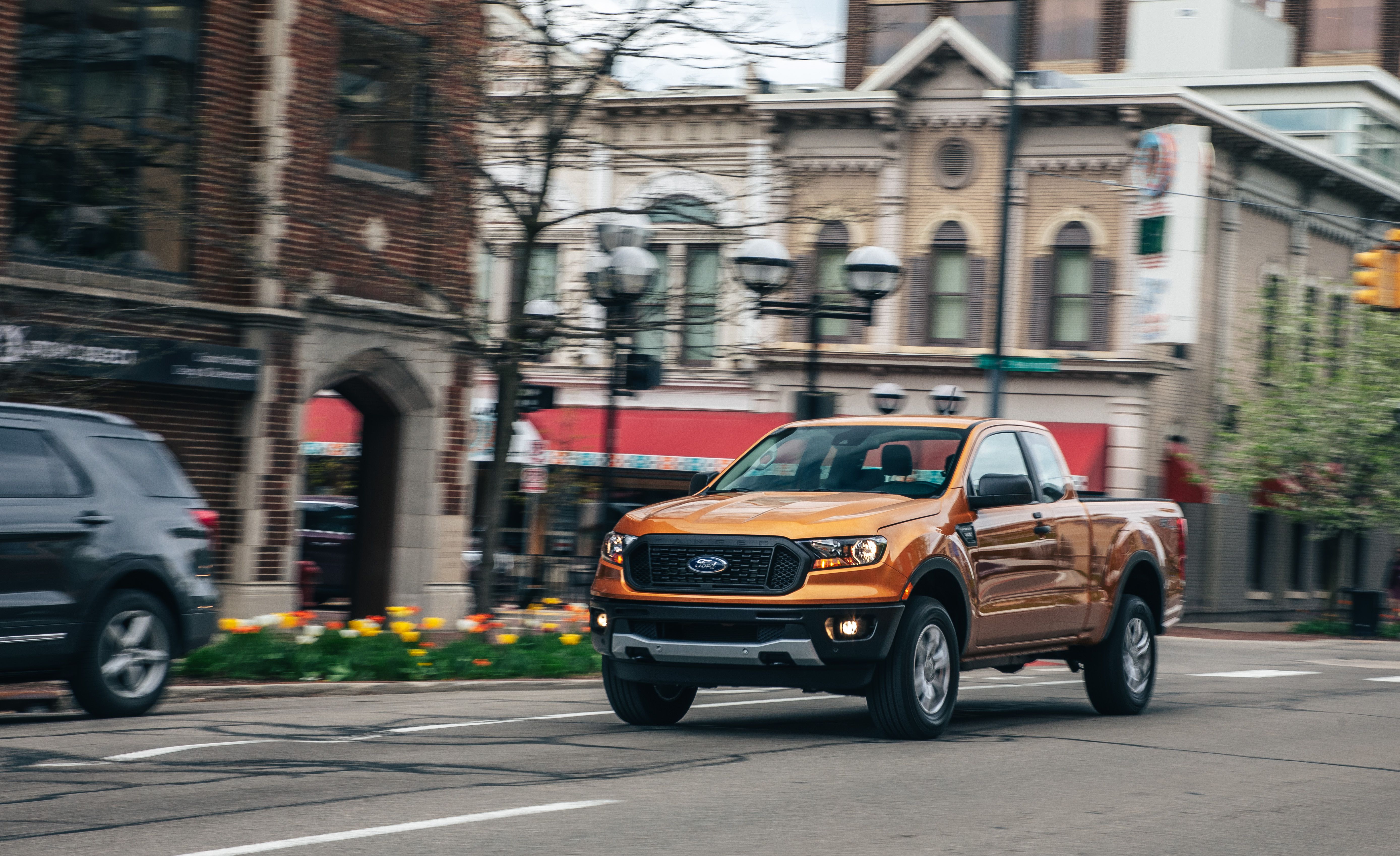 The 2019 Ford Ranger, in its lowest-grade XL trim, is affordable by modern pickup standards at $25,495 to start. Although it doesn't quite sit in the same bargain basement as entry-level versions of the Nissan Frontier and the Chevrolet Colorado, its slight premium is more than offset by the Ranger's extra standard equipment, including a powerful turbocharged four-cylinder engine (the Nissan and Chevy have lowly nonturbo fours as standard) and snappy driving dynamics.

This is our first test of a new Ranger so affordably priced; the other two versions we've evaluated were four-wheel-drive crew-cab models. Beyond its XL trim, our test truck held its price down by sacrificing the available crew-cab body (SuperCrew, in Ford-speak) in favor of the stubbier extended-cab (SuperCab) option and sticking with two-wheel drive. The XL locks you out of the gear available on nicer Ranger trims, including leather seats and an 8.0-inch touchscreen, instead leaving you with cloth seats and a button-heavy version of the ancient MyFord non-touchscreen familiar to any last-generation Ford buyer. Our truck wasn't even equipped with carpeting, its floor instead loosely covered in black vinyl matting. 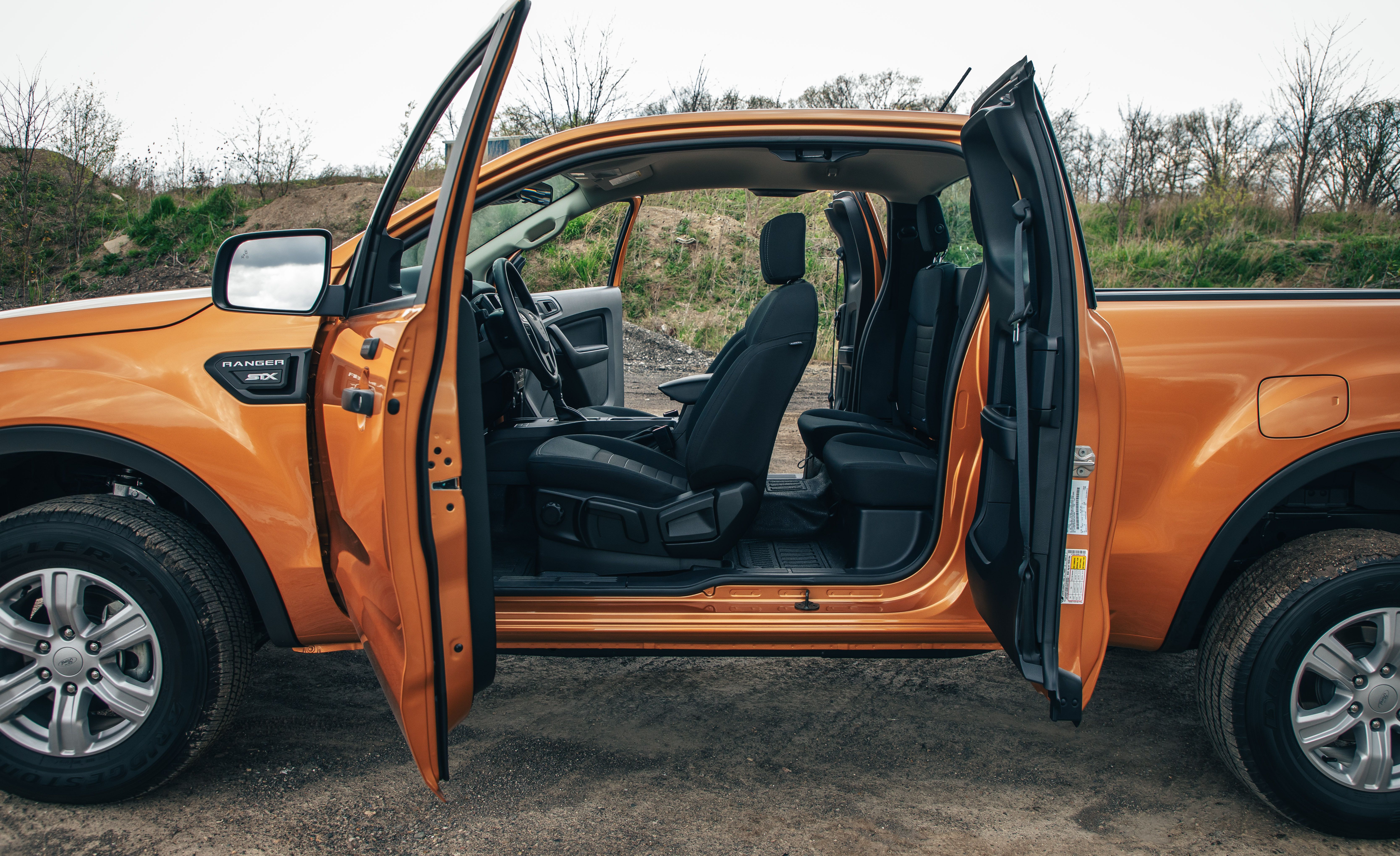 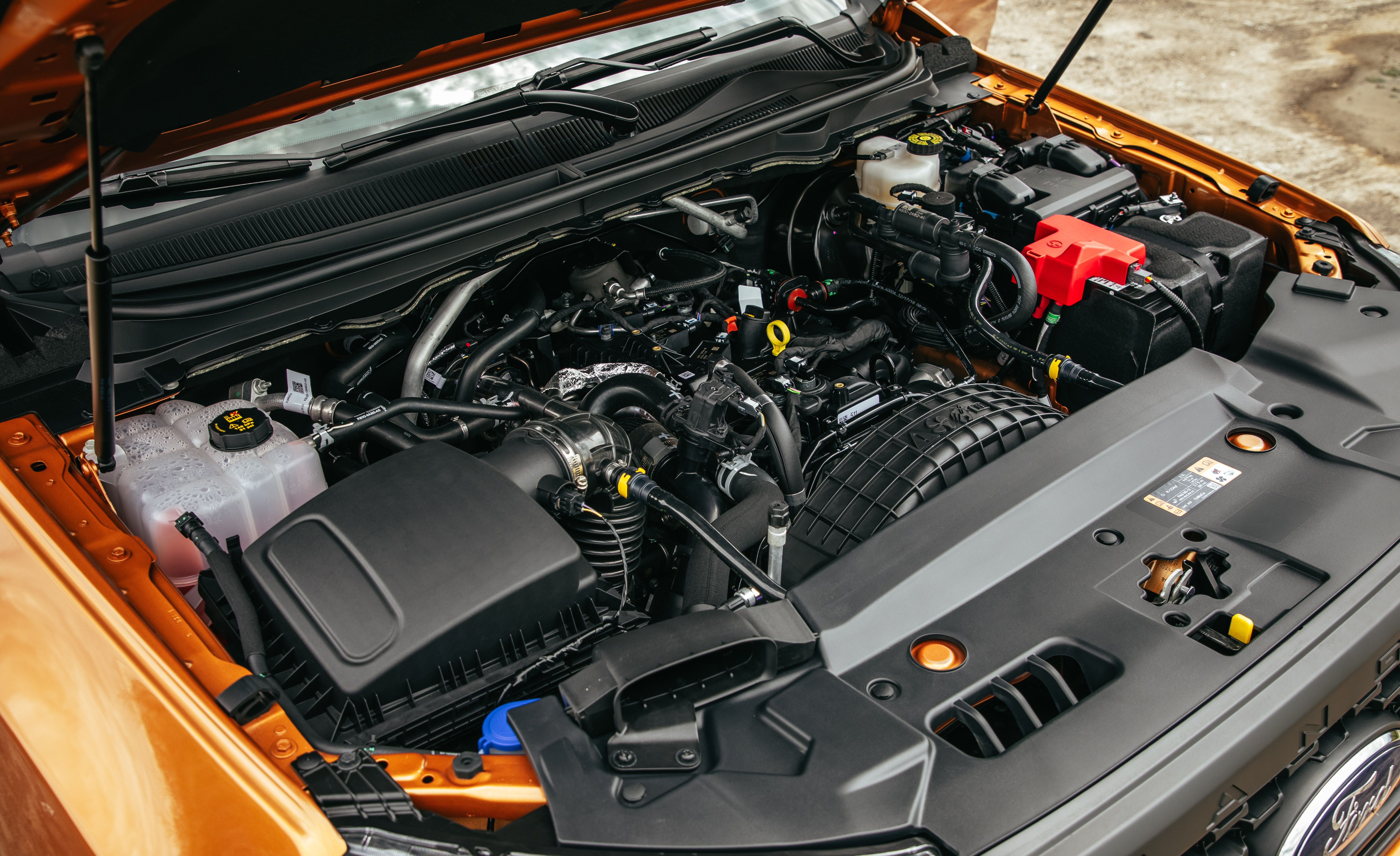 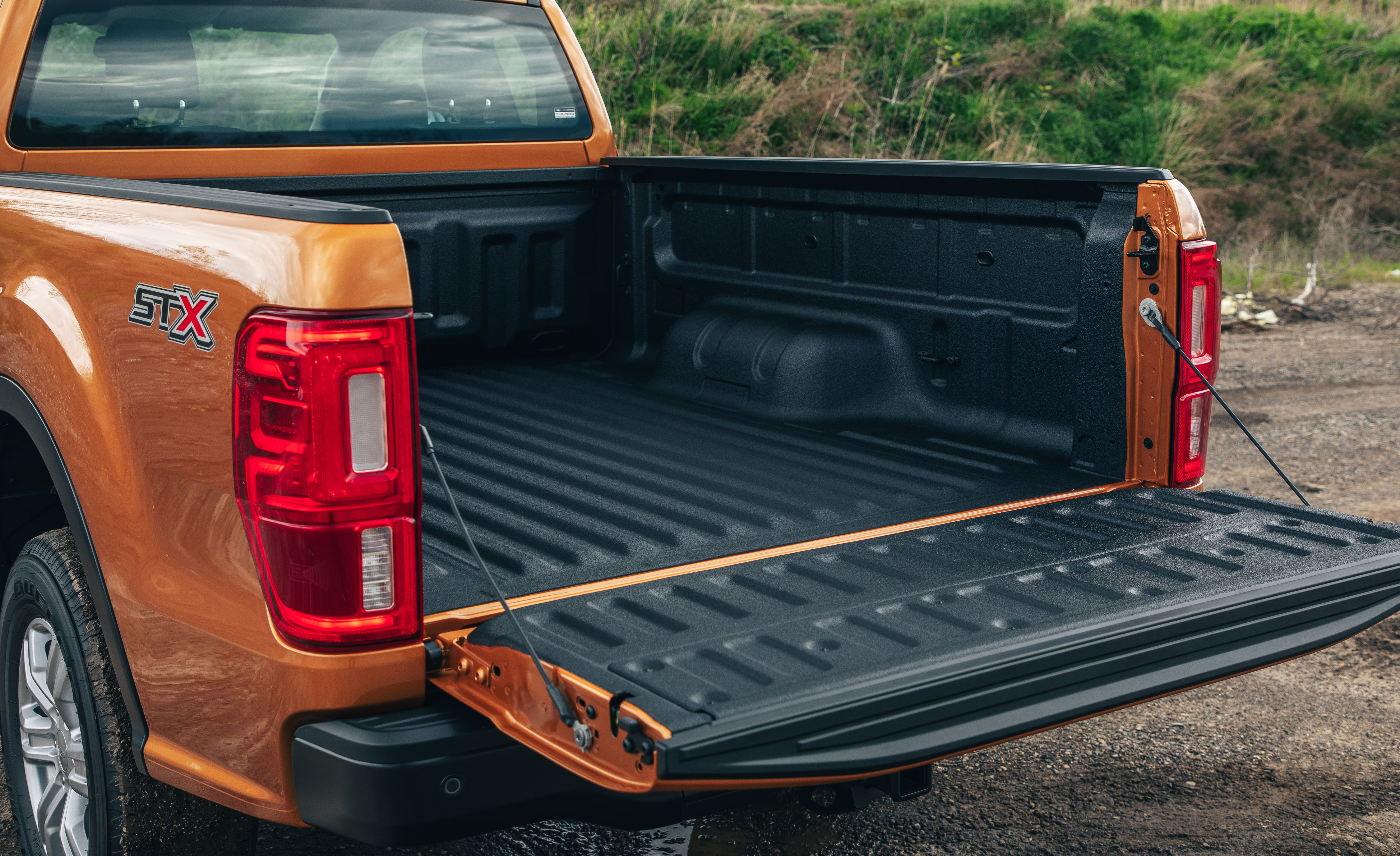 Cheap and Quick
Color us happy, if not entirely surprised, by this spartan Ranger XL's performance. Sharing its 270-hp turbocharged 2.3-liter inline-four and 10-speed automatic transmission with the rest of the Ranger lineup, this SuperCab was a significant 500 pounds lighter than the two crew-cab Rangers we've tested previously. That diet helped the XL reach 60 mph a half-second quicker, in only 6.0 seconds flat, a time that qualifies as quick in most mainstream vehicle segments and scorching amongst mid-size pickups. With less mass to contend with, the extended-cab Ranger XL also stopped from 70 mph in 178 feet, which is between 12 and 15 feet shorter than its porkier siblings.

The lighter-weight XL's ride quality felt impressively smooth, although its 0.77 g of grip on the skidpad matched that of other Rangers we've tested. As becomes a Ranger hallmark, this one handles decently and with good composure when tossed around. The electrically assisted steering is a bit slow to react, but the brake pedal operates with a pleasant firmness, albeit an overboosted feel. The body structure feels nice and solidly affixed to the frame, with little sense of the bed and cab jiggling independently of each other over rough pavement.

The EcoBoost engine provides smooth, punchy thrust around town, and the 10-speed automatic quickly shifts up and down as conditions dictate. At highway speeds, however, its responses deaden, with large throttle applications necessary for instigating downshifts for passing maneuvers. With so many gears to choose from, this transmission should be able to quickly and smoothly sort through its upper ratios without forcing a big, multigear downshift that sends the engine revving unnecessarily. Peak torque, after all, hits at 3000 rpm; unlike with some competitors' naturally aspirated V-6 engines, which need to be revved higher to make substantial power, Ford's turbo four prefers wafting along on a wave of low-end torque.

More of the Same
This Ranger's charms mostly end at its dynamic sparkle, though. It has a mediocre interior filled with hard plastics. A lot of the switchgear and bits are clearly pilfered from some of the oldest vehicles in Ford's global lineup, namely the small driver-information display that debuted in the United States in the 2012 Focus. That is generally par for the course in this class, however; if you want a fancier interior, either purchase a Honda Ridgeline or skip the mid-size-truck category altogether for a full-size rig.

We won't hold the SuperCab body's limitations against it. After all, other mid-size trucks' extended-cab offerings are similarly punishing for rear-seat passengers. Whether saving $2400 and hundreds of pounds of weight by opting for the SuperCab is a good decision we'll leave up to you and your people- and cargo-hauling needs. If you're buying this truck purely for workhorse duty, great-enjoy the extra performance and the longer six-foot bed that replaces the crew-cab's five-footer. Ford will even let you delete the rear seats altogether and save another $240. Those hoping to bring more than one full-size human along for the ride will feel differently about the rear seats, which are as discombobulating to the human form as those in the Ranger's extended-cab competitors, with a bolt-upright backrest, limited legroom, and a cushion that's uncomfortably low to the floor and thinly padded.

It's easier to part with four-wheel drive. Provided you aren't planning on hard-core off-roading your Ranger, its modern traction-control (and maybe some good ol' bags of sand in the bed) should get you through winter muck. Plus, skipping four-wheel drive saves you $4160. Ford helps customers shield all of these savings by way of the $995 STX Appearance package that was fitted to our test truck. The package helped our $29,445 (as tested) Ranger XL visually transcend its budget station, replacing the XL's 16-inch wheels with 17s and adding body-color fender flares, gloss-black bumpers front and rear, and fog lights. Ford also tosses in splashy "STX" stickers for each side of the pickup bed. Other options included a $495 spray-in bedliner, a $95 security keypad for the driver's door, and the $495 trailer tow package, which boosts the rear-wheel-drive Ranger's towing capacity from 3500 pounds at the bumper to a heady 7500 pounds.

Unique in this segment, Ford offers even the base Ranger XL with the same active-safety features many competitors reserve for their priciest models. Our truck came equipped with the $750 Co-Pilot 360 package, which adds forward-collision warning, lane-keeping assist, blind-spot monitoring, front and rear parking sensors, and automatic high-beam control. The option also installs a pair of USB ports and a 110-volt AC power outlet in the back of the center console, facing those poor souls relegated to the SuperCab's rear seat. These are strange luxuries for what are most certainly the least popular seats in the extended-cab Ranger. More realistically, owners could use the AC power outlet to run accessories or power tools at a work site. For some reason, the Co-Pilot 360 package doesn't extend its power-outlet love to the front seats, which gets only a single USB port, along with two 12-volt outlets.

Mission Accomplished
Cheap but not charming, the Ford Ranger XL in extended-cab form didn't leave us dredging up thoughts of those nostalgic, oft-romanticized memories of workhorse pickups from the time before trucks offered up ventilated seats, trailer-tow aids, and other luxuries. But we can definitively call it better than the antique of the segment, the even-thriftier Nissan Frontier. The Ford Ranger is relatively modern, well rounded, and has appealing standard and available features. That it's handsome to look at, has comfortable front seats, and drives reasonably well are merely bonuses. Though we averaged only 19 mpg in mixed driving, the Ranger did notch 25 mpg on our 75-mph highway fuel-economy test, 1 mpg below its EPA highway estimate. While the new Ford Ranger doesn't fare that well against its competitors when loaded down with equipment, the starter XL model is exactly what it needs to be: a good, if not great, pickup for less than $30,000.
You must log in or register to reply here.
Share: Facebook Twitter Google+ Reddit Pinterest Tumblr WhatsApp Email Link