2019 Ford Ranger: Are other diesel and gasoline V6 engines possible? 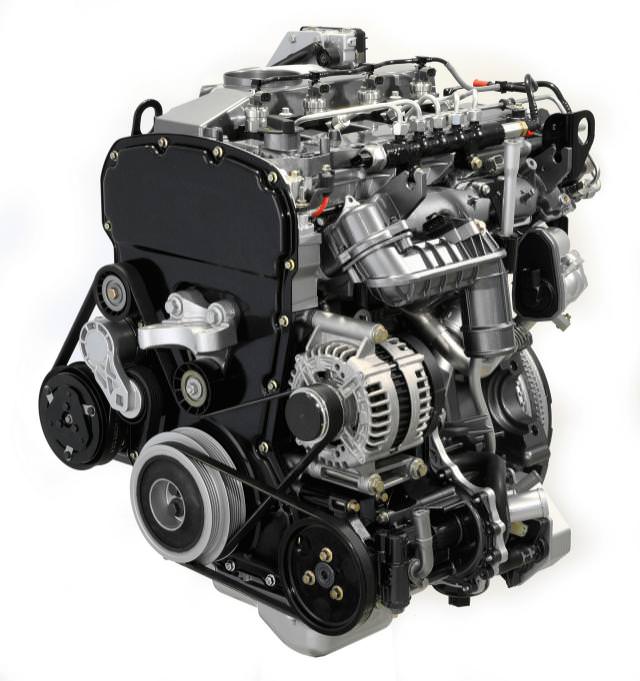 The 2019 Ford Ranger is launching with the 2.3-liter EcoBoost inline-four, a turbocharged engine with very healthy specs in the Mustang and Focus RS . The new Ranger's direct competitor, the Chevrolet Colorado , offers three engine choices. Considering the one-upsmanship battle raging between the brand new 2019 Silverado 1500 (and its still mysterious Duramax inline-six diesel engine) and the F-150 's new diesel V6, we don't think Ford is leaving things there.
There are a few engines that could find their way under the hood of the Ranger. Let's cover them in turn. The 3.2-Liter Power Stroke diesel option

The Ford Transit offers the Power Stroke 3.2-liter engine backed up with a six-speed automatic in the United States, which is sold as a Duratorq in other parts of the world. It's an inline-five, turbocharged diesel engine that produces 185 horsepower and 350 lb-ft of torque. In the Transit, it offers great payload and towing numbers: 3,280 lbs and 4,800 lbs, respectively. The
EPA doesn't list fuel economy numbers for this vehicle.
The strongest case for the 3.2 is that it's actually fitted already in global Rangers as the top-dog engine choice for some markets. Since the U.S. Ranger is largely identical to the global Ranger, it'll theoretically bolt right up. The Chevy Colorado Duramax diesel question

Let's assume that the 3.2's output figures would be unchanged in the Ranger. With a Power Stroke 3.2 under the hood, the Ranger would be very close to the Chevy Colorado's available 2.8-liter Duramax turbodiesel I-4. The Duramax makes 181 hp and 369 lb-ft of torque. Considering the Power Stroke's larger displacement and greater cylinder count, there may be some room to tweak the tune to beat the Duramax, but it's close enough that Ford shouldn't be embarrassed either way.
We've evaluated this engine in the Transit on our first drive review back in 2014. Here's what the reviewer thought of the engine:
"It's kind of a brute too, offering 90 percent of peak torque starting at 1,500 rpm. While not the drag racer the EcoBoost is, it'll certainly drag some stuff. The 3.2 is expected to be the prime fuel economy and long-term durability option, and it'd better be considering it's the most expensive." Count the Power Stroke 3.2 a probable engine option for the future, particularly for a Duramax ZR2-fighting FX4 Level II trim, barring it interfering with crash test requirements or the like.
Ford's Power Stroke 3.0-liter V6 ? less likely

Ford just debuted another light-duty (that is to say, not for huge commercial trucks ) diesel engine in the F-150. It's a 3.0-liter turbodiesel V6 that makes 250 hp at 3,250 rpm and 440 lb-ft of torque at 1,750 rpm. Ford hasn't released official fuel economy numbers yet, but it's aiming for 30 mpg on the highway. There's no real barrier preventing Ford from detuning it slightly for smaller truck work.
There are a few questions that prevent us from saying whether it'd actually work in the Ranger. The global Ranger features only inline engines, ranging from the 2.2-liter Duratorq inline-four to the 3.2-liter inline-five mentioned above. There's no clear answer yet as to whether a wide dual-overhead cam V6 featuring a 60-degree bank angle would fit up front. For one, it's not clear the global Ranger was engineered to fit a V6 from the start. We also don't know if Ford would reengineer the engine compartment to make it so. It'd also put it in competition with the larger F-150 with the same engine, even in detuned form. Count this one as much more of a long-shot. A range of EcoBoost engines?

On the other hand, a V6 of some sort seems like a good idea for the United States, and until told otherwise we'll consider it a strong possibility. Far likelier than the Powerstroke V6 is an EcoBoost V6. The 2.7-liter EcoBoost V6 engine is versatile and flexible. While it presents similar packaging concerns as the Powerstroke V6, being another DOHC engine with a 60-degree bank angle, it's available in a wide range of power outputs already, ranging from 315 hp in the old Edge Sport to 335 hp in some Lincoln products.
If Ford did reengineer the engine compartment to accommodate a V6, the 2.7 is what we imagine would be the best fit. Imagine if Ford decided it needed a mini-Raptor to compliment its desert-conquering F-150 Raptor . What engine to choose? You can't upstage the big Raptor by putting a 3.5-liter EcoBoost into a smaller package. But you could give the 2.7-liter EcoBoost a little kick, perhaps up to the 335 hp/380 lb-ft spec. That will likely give it enough of a useful power bump over the likeliest 2.3-liter EcoBoost tune to make it something special, and certainly it'll be working less hard than the 2.3 to make big power.
A one-engine truck?
O

Here in Australia they are introducing the Diesel Biturbo 4 Cyl engine in our Raptor version and possibly other ranger models.