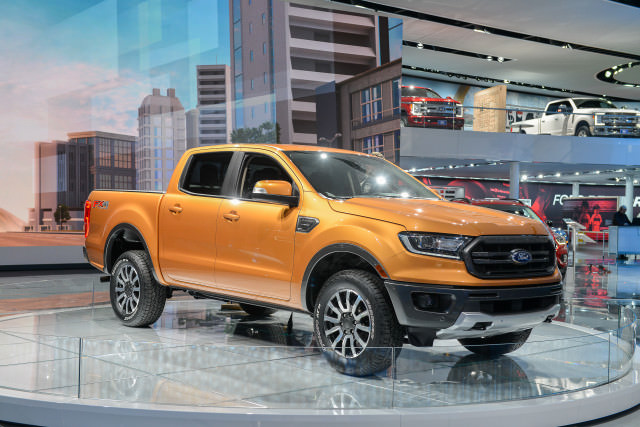 The 2019 Ford Ranger mid-size pickup truck will be priced above most its competition when it goes on sale later this year, the automaker said Tuesday.

The automaker said that the least expensive version of the 2019 Ranger will cost $25,395. That price is for the Ranger XL with rear-wheel drive, a 2.3-liter turbo-4 engine, an extended-cab body, and a 6-foot bed. Adding four-wheel drive jacks up the Ranger's price to $29,555. A fully loaded Ranger Lariat with every option box selected costs about $46,500.

Major options on some trims include chrome and blacked-out appearance packages, an FX4 off-road package, a bedliner, and B&O audio.

Here's a look at Ranger prices including a mandatory $1,095 destination charge broken down by drive wheels and body styles:

The most popular mid-size pickup in the U.S. by sales volume has also been the most expensive, and will be until the Ranger arrives. The 2018 Toyota Tacoma starts at $24,730, albeit with a trim package that deletes rear seats and a few other items for a $1,715 credit.
You must log in or register to reply here.
Share: Facebook Twitter Google+ Reddit Pinterest Tumblr WhatsApp Email Link